Recently, India has participated in the 17th ASEAN-India Virtual Summit on the invitation of Vietnam, the current Chair of Association of Southeast Asian Nations (ASEAN). Prime Minister Narendra Modi will co-chair the 17th ASEAN-India Summit along with his Vietnamese counterpart Nguyen Xuan Phuc on November 12, 2020. The first virtual summit of India and the ASEAN nations will see participation from the leaders of all ten ASEAN Member States. The summit focused on measures to recover from the economic turmoil triggered by the Covid-19 pandemic and ways to further broad-base strategic ties. 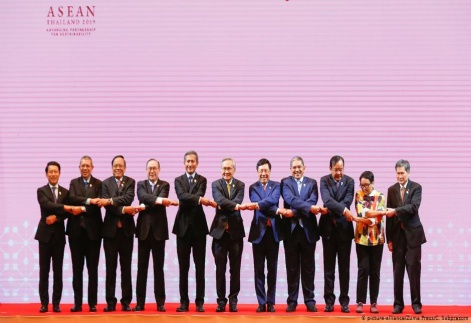  The Association of Southeast Asian Nations is a regional intergovernmental organization comprising ten countries in Southeast Asia, which promotes intergovernmental cooperation and facilitates economic, political, security, military, educational, and sociocultural integration among its members and other countries in Asia. ASEAN also regularly engages other countries in the Asia-Pacific region and beyond. A major partner of Shanghai Cooperation Organisation, ASEAN maintains a global network of alliances and dialogue partners and is considered by many as a global powerhouse, the central union for cooperation in Asia-Pacific, and a prominent and influential organization. It is involved in numerous international affairs, and hosts diplomatic missions throughout the world.

 ASEAN was preceded by an organisation formed on 31 July 1961 called the Association of Southeast Asia (ASA), a group consisting of Thailand, the Philippines, and the Federation of Malaya. ASEAN itself was created on 8 August 1967, when the foreign ministers of five countries: Indonesia, Malaysia, the Philippines, Singapore, and Thailand, signed the ASEAN Declaration. As set out in the Declaration, the aims and purposes of ASEAN are to accelerate economic growth, social progress, and cultural development in the region, to promote regional peace, collaboration and mutual assistance on matters of common interest. ASEAN was established on 8 August 1967 in Bangkok by the five original member countries: Indonesia, Malaysia, Philippines, Singapore, and Thailand. Brunei Darussalam joined on 8 January 1984, Vietnam on 28 July 1995, Laos and Myanmar on 23 July 1997, and Cambodia on 30 April 1999

• The motto of ASEAN is “One Vision, One Identity, and One Community”.
• 8th August is observed as ASEAN Day.
• ASEAN Secretariat – Indonesia, Jakarta.  In 1990, Malaysia proposed the creation of an East Asia Economic Caucus composed of the members of ASEAN, China, Japan, and South Korea. It intended to counterbalance the growing US influence in Asia-Pacific Economic Cooperation (APEC) and Asia as a whole. However, the proposal failed because of strong opposition from the US and Japan. Work for further integration continued, and the ASEAN Plus Three, consisting of ASEAN, China, Japan, and South Korea, was created in 1997.

 ASEAN Plus Three was the first of attempts for further integration to improve existing ties of Southeast Asia with East Asian countries of China, Japan and South Korea. This was followed by the even larger East Asia Summit (EAS), which included ASEAN Plus Three as well as India, Australia, and New Zealand. This group acted as a prerequisite for the planned East Asia Community which was supposedly patterned after the European Community (now transformed into the European Union). The ASEAN Eminent Persons Group was created to study the possible successes and failures of this policy. The group became ASEAN Plus Six with Australia, New Zealand, and India, and stands as the linchpin of Asia Pacific's economic, political, security, socio-cultural architecture, as well as the global economy.

 India's Act East Policy: Against the backdrop of aggressive moves by China, including the Ladakh standoff, India placed the ASEAN at the centre of India’s Act East policy and held that a cohesive and responsive ASEAN is essential for security and growth for all in the region.

 Regional Comprehensive Economic Partnership: India would explore ways to increase trade despite its exit from the 15-nation RCEP agreement in 2019. The RCEP free trade agreement is expected to be signed on 15th November 2020 between China, Australia, South Korea, Japan, and the ASEAN Members. However, experts have warned that once the RCEP is adopted, trade between RCEP nations will assume primacy, which could affect trade ties with other countries including India.

 South China Sea: Affirmed the importance of maintaining and promoting peace, stability, safety and security in the South China Sea, and ensuring freedom of navigation and over flight. Noted the importance of promoting a rules-based order in the region including through upholding adherence to international law, especially the United Nations Convention on the Law of the Sea (UNCLOS).

 Regulating Covid-19 Pandemic: India welcomed ASEAN’s initiatives to fight the pandemic and announced a contribution of USD 1 million to Covid-19 ASEAN Response Fund. It also underlined the importance of cooperation and regular exchanges in the field of traditional medicines as a source of healthy and holistic living.

 Trade and Investment: India underlined the importance of diversification and resilience of supply chains for post-Covid-19 economic recovery. India called for an early review of ASEAN-India Trade in Goods Agreement (AITIGA), which is pending for a long time. 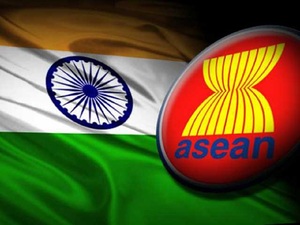 • India's relationship with ASEAN is a key pillar of her foreign policy and the foundation of Act East Policy. India has a separate Mission to ASEAN and the EAS in Jakarta. India and ASEAN already has 25 years of Dialogue Partnership, 15 years of Summit Level interaction and 5 years of Strategic Partnership with ASEAN.
•
• Economic Cooperation: ASEAN is India's fourth largest trading partner. India's trade with ASEAN stands at approx. 10.6% of India's overall trade. India's export to ASEAN stands at 11.28% of our total exports. The ASEAN-India Free Trade Area has been completed. ASEAN India-Business Council (AIBC) was set up in 2003 to bring key private sector players from India and the ASEAN countries on a single platform.

• Delhi Declaration: To identify Cooperation in the Maritime Domain as the key area of cooperation under the ASEAN-India strategic partnership. Delhi Dialogue: Annual Track 1.5 event for discussing politico-security and economic issues between ASEAN and India.

• ASEAN-India Centre (AIC): To undertake policy research, advocacy and networking activities with organizations and think-tanks in India and ASEAN. For Political Security Cooperation, India places ASEAN at the centre of its Indo-Pacific vision of Security and Growth for All in the Region.

Q.2 What was the main objective of the foundation of ASEAN?

A. To form an economic block against European countries
B. To accelerate economic progress in Southeast Asia: ANSWER
C. To finalize step by step a programme to develop a free market zone
D. None of the above

Q.3 Which of the following country is not the member of the ASEAN?

Q.4 Which of the following country is assuming Chair of ASEAN during the 17th ASEAN-India Virtual Summit?

Q.5 Which of the following statements is/are correct about the ASEAN plus Three & ASEAN plus Six? 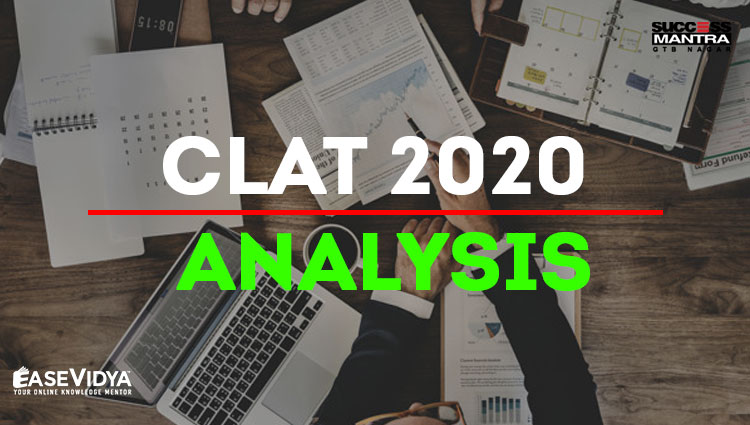 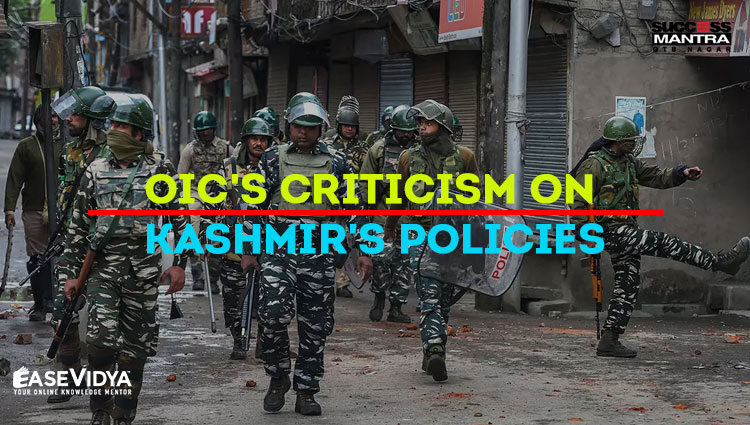 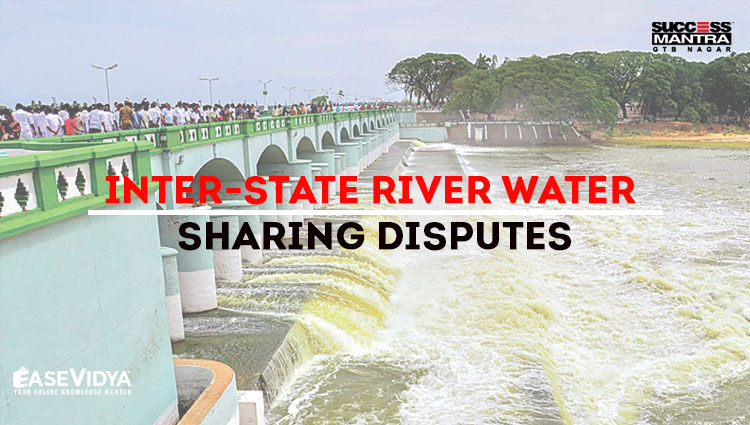