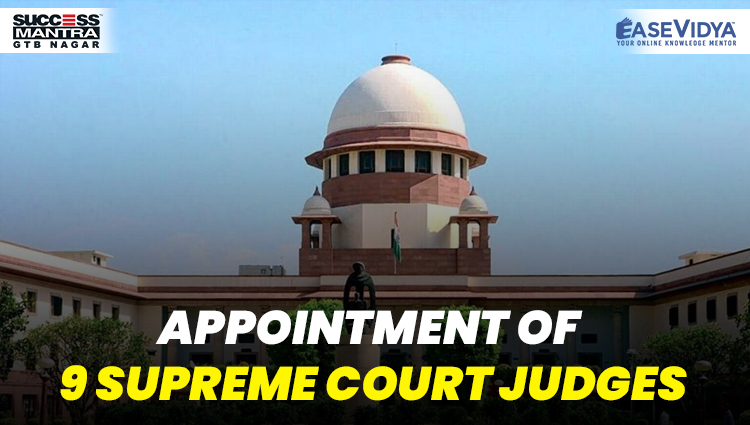 Chief Justice of India (CJI) NV Ramana administered the Oath of Office to nine new Judges, including three women Judges, of the Supreme Court. This is the first time in the history of the apex court that nine judges took the oath of office to the Supreme Court in one sitting. With the swearing-in ceremony, the strength of the Supreme Court has reached 33 including the CJI against the sanctioned strength of 34. This year, the venue for the swearing-in ceremony was held in the auditorium of the Supreme Court’s additional building complex due to COVID-19 protocols. Till now, the new judges took the oath of office in the CJI’s courtroom. Three out of these nine new judges, Justice Vikram Nath, Justice B V Nagarathna, and Former Additional Solicitor General P S Narasimha are in line to become the Chief Justice of India in 2027. Of these, Justice B V Nagarathna could become the first woman Chief Justice of India in 2027. The Central Government had cleared the names of nine new judges, including three women judges, recommended by the Supreme Court Collegium headed by Chief Justice of India (CJI) N V Ramana on August 18, 2021. All nine names were sent to the President of India for issuance of the warrant of appointments. The swearing-in ceremony was expected to be held within the week once the names got approved by the President.

Here are the names of nine new judges of the Supreme Court:

Since the inception of the Supreme Court, only 8 women judges have been appointed over the past 71 years. Justice M Fathima Beevi was the first woman judge who was appointed in 1989. Prior to the appointment of the 3 new women judges to the Supreme Court, Justice Indira Banerjee has been the only woman judge in the country’s apex court since her elevation on August 7, 2018.

Justice B V Nagarathna of Karnataka High Court could become the next and first woman Chief Justice of India (CJI) in 2027 if SC Collegium’s recommendations of names are considered by the Union Government. Justice Nagarathna is currently a Judge in the Karnataka High Court. She began as a lawyer in 1987 in Bengaluru practicing in constitutional law and commercial law including administrative and public law, arbitration and conciliation, land and rent laws, insurance law, family law, conveyancing & drafting of contracts and agreements, etc. In February 2008, she got appointed as an additional judge in the Karnataka High Court. Later in 2010, she became a permanent judge. Justice Nagarathna’s father ES Venkataramiah was the Chief Justice of India for 6 months in 1989. In 2012, Justice Nagarathna ruled that regulation of electronic media is needed thereby emphasizing curbing sensationalism of news through ‘Breaking News’, ‘Flash News’, or any other way of sensationalized presentations. In 2019, Justice Nagarathna ruled that a temple employee will be entitled to gratuity benefits under the Karnataka Hindu Religious Institutions and Charitable Endowment Act and not under the Payments of Gratuity Act deeming that a temple is not a ‘commercial establishment’.

Justice Hima Kohli of Telangana High Court is the first woman Chief Justice of the state. She was sworn in as the Chief Justice of Telangana High Court. Earlier, she was serving as a Judge of the Delhi High Court. In 2006, Justice Kohli was appointed as an Additional Judge on the Delhi High Court, and later in 2007, she was made a permanent Judge on the Delhi HC. Justice Kohli had enrolled with the Bar Council of Delhi in 1984. She has served as a legal advisor to many Delhi and Central government bodies such as the National Co-operative Development Corporation, the National Agricultural Cooperative Marketing Federation of India, and the Delhi Pollution Control Committee. In 2020, a judicial committee formed to monitor Delhi Government’s response during the COVID-19 pandemic was led by Justice Kohli.

Q.1 Recently, Chief Justice of India (CJI) NV Ramana administered the Oath of Office to nine new Judges, including three women Judges, of the Supreme Court. Which amongst the following is not the woman judges appointed recently?

Q.2 Of the three women judges, which of the following woman judge could become the first woman Chief Justice of India (CJI) in 2027 if SC Collegium’s recommendations of names are considered by the Union Government?

Q.3 Consider the given options & state which of the following is not included in the qualification for being a judge in the Supreme Court?

Q.4 From the given options, Which of the following Constitutional posts is authorised to remove the Judge of the Supreme Court?

Q.5 Who among the following has the right to establish the bench of the Supreme Court elsewhere in the country?