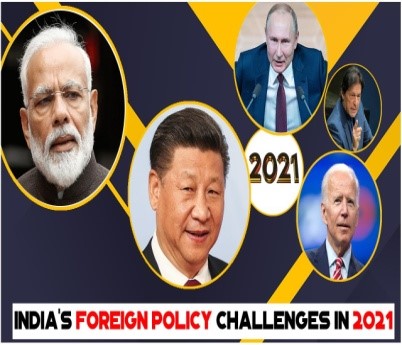 Like any other country, India’s foreign policy envisages to widen its sphere of influence, enhance its role across nations, and make its presence felt like an emerging power. The year 2021 presents a bunch of challenges and opportunities in pursuit of fulfilling foreign policy objectives. For instance, the rise of China and its influence in India’s neighbourhood is a cause of worry for India. Moreover, concluding the negotiations for an EU-China Comprehensive Agreement on Investment debunks the myth of Chinese isolation after Covid-19 pandemic and further strengthened China’s position. Moreover, India’s foreign policy decisions like growing convergence with the US have led to weakening its links with traditional friends like Russia and Iran. Therefore, in shifting the balance of power in the region, India needs to tackle foreign policy challenges and leverage opportunities carefully.

CHALLENGES AHEAD FOR INDIA 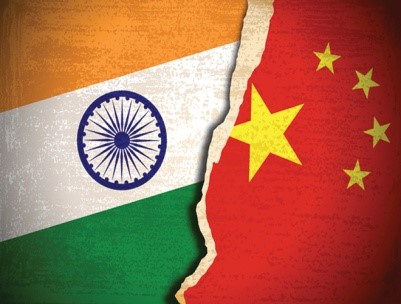 A Stronger China: China is the only major country that had a positive growth rate at the end of 2020, and its economy is poised to grow even faster in 2021. Militarily, China has further strengthened itself and now seeks to dominate the Indo-Pacific Ocean with its announcement of its third aircraft carrier’s launch in 2021. In this context, any breakthrough in Sino-Indian relations is unlikely to occur, and the confrontation between Indian and Chinese armed forces is expected to continue. India does not have the economic capacity as China. Thus it should cooperate with China for the development of these countries such that fruits of development collectively reach South Asia. It should also strongly condemn the plans for extension of the China-Pakistan Economic Corridor. Further India should invest in these countries where China falls short and maintain its good will in South Asia and prevent these nations from slipping off from India’s Influence.

Growing Russia-China Axis: Russia is beginning to display more significant interest in its periphery’s affairs. Moreover, the sanctions imposed on Russia after Crimea's annexation in 2014 has pushed Russia towards a tighter embrace of China. This seems to signal reduced interest in countries such as India. Also, India’s closeness to the U.S. has weakened its links with traditional friends such as Russia and Iran.

Changing Middle East Equations: The US-brokered rapprochement between Israel and four Arab countries — the UAE, Bahrain, Morocco and Sudan — reflected the changing landscape in the region. However, despite the hype surrounding Abraham Accords, the situation remains fluid and has not reduced the risk of a confrontation between Iran and Israel. Given the region’s strategic flux, Iran could well be tempted to use its nuclear capability to enhance its position. This does pose problems for India since both have relations with it.

Self-Imposed Isolation of India: Currently, India remains isolated from two important supranational bodies of which it used to be a founding member, viz., the Non-Aligned Movement (NAM) and the South Asian Association for Regional Cooperation (SAARC). Moreover, India has opted out of the Regional Comprehensive Economic Partnership (RCEP). This self-imposed isolation doesn’t synergise with India’s aspiration of becoming a global power.

WHAT IS SAARC & RCEP? The South Asian Association for Regional Cooperation (SAARC) was established with the signing of the SAARC Charter in Dhaka on 8 December 1985. The idea of regional cooperation in South Asia was first raised in November 1980. After consultations, the foreign secretaries of the seven founding countries—Bangladesh, Bhutan, India, Maldives, Nepal, Pakistan, and Sri Lanka—met for the first time in Colombo in April 1981. Afghanistan became the newest member of SAARC at the 13th annual summit in 2005. The Headquarters and Secretariat of the Association are at Kathmandu, Nepal. The Objectives of the SAARC is to promote the welfare of the people of South Asia and to improve their quality of life. To accelerate economic growth, social progress and cultural development in the region and to provide all individuals the opportunity to live in dignity and to realize their full potentials. To promote and strengthen collective self-reliance among the countries of South Asia. To contribute to mutual trust, understanding and appreciation of one another’s problems. To promote active collaboration and mutual assistance in the economic, social, cultural, technical and scientific fields.

Regional Comprehensive Economic Partnership (RCEP) was signed into existence by 15 countries led by China, Japan, South Korea, Australia, New Zealand and the 10-state ASEAN grouping, creating one of the world’s largest trading blocs. India had been a part of negotiations for almost nine years till it pulled out in November 2019, stating that inadequate safeguards and lowering of customs duties will adversely impact its manufacturing, agriculture and dairy sectors. However, by staying out, India has blocked itself from a trade bloc that represents 30% of the global economy and world population, touching over 2.2 billion people. Further, as the summary of the final agreement shows that the pact does cover and attempt to address some issues that India had flagged, including rules of origin, trade in services, movement of persons. Therefore, this makes the case of India to review its decision and look RCEP through the lens of economic realism.

Neighbourhood First: Through a series of diplomatic efforts, India should make valiant efforts to improve relations with some of its neighbours such as Bangladesh, Myanmar and Sri Lanka, In this context, as the world emerges from the pandemic, India has a lot to gain from what could be “vaccine diplomacy” with neighbours in 2021 — supplying vaccines either free or at affordable costs.

External Aid in Adequate Measure: The current standoff with China has reinforced JL Nehru’s belief in 1963 that India needs “external aid in adequate measure”. In this context, India will need continuing support from the US, Japan, Australia, besides European leaders such as France, Germany and the UK. India should appreciate European entry into Indo-pacific narrative, as already, France and Germany have come up with their Indo-Pacific strategy.

India at UNSC High Table: As India enters the UN Security Council as a non-permanent member for the eighth time, India should raise all-important global matters like China’s aggressiveness— from Tibet to Taiwan, Iran-Saudi rivalry, refugee crisis between Bangladesh and Myanmar, etc. India should refrain from a limited focus on isolating Pakistan, as it would distract from India’s aspirations of being a global leader.

Engaging With US: As the future of Quad and the Indo-Pacific strategy relies on the new US administration, India will need to build on its deepening strategic and defence ties with the US and resolve trade and visa issues. In the light of the changing actualities of the international situation, India must cautiously play foreign policy, if it wants to emerge as a global rather than an aspirational player.