OUTCOMES OF PM VISIT TO BANGLADESH

OUTCOMES OF PM VISIT TO BANGLADESH

The Prime Minister of India paid a State Visit to Bangladesh to join the celebrations of the Golden Jubilee of the Independence of Bangladesh, the Birth Centenary of the Father of the Nation Bangabandhu Sheikh Mujibur Rahman and 50 years of establishment of diplomatic relations between India and Bangladesh. 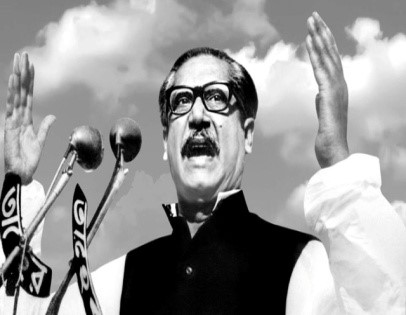 To mark the 50th anniversary of India-Bangladesh friendship: Both sides released respective commemorative postage stamps. Decided to commemorate 6th December as Maitri Diwas, the day when India recognized Bangladesh in the year 1971. India announced the establishment of the Bangabandhu Chair at the University of Delhi. Bangladesh thanked India for naming the historic road from Mujib Nagar to Nadia on the Bangladesh-India border as "Shadhinota Shorok” commemorating the historic significance of the road during Bangladesh’s Liberation War.

Water Resources Cooperation:  Bangladesh reiterated its long-pending request for concluding the interim agreement on the sharing of the waters of the Teesta river. The draft agreement has already been agreed upon by both Governments in January 2011. India also requested for early finalization of the draft of the interim agreement for sharing of water of Feni River, pending with the Bangladesh side which had been agreed upon by both sides in 2011. Also, requested working towards an early conclusion of the Framework of Interim Agreement on sharing of waters of six common rivers, namely, Manu, Muhuri, Khowai, Gumti, Dharla and Dudhkumar. Directed the Joint Technical Committee to expeditiously commence the feasibility study of the Ganges-Padma barrage for optimum utilization of the Ganges waters received by Bangladesh as per the Ganges Water Sharing Treaty, 1996. 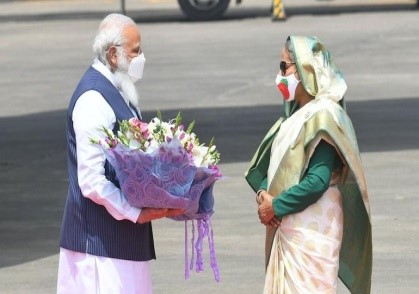 Stressed the need for predictability of trade policies, regulations and procedures and the need for removal of non-tariff barriers. Stressed the urgent need for up-gradation of infrastructure and facilities of the Land Customs Stations (LCSs)/Land Ports in a coordinated manner to facilitate trade between the two countries. Reiterated the importance of harmonization of standards and mutual recognition of agreements and certificates for enhancing bilateral trade. Bangladesh Standards and Testing Institute (BSTI) and the Bureau of Indian Standards (BIS) would collaborate for the capacity building and development of testing and Lab facilities. India congratulated Bangladesh on its upcoming graduation from the Least Developed Country (LDC) status. Emphasized on expeditious conclusion of the ongoing joint study on the prospects of entering into a Comprehensive Economic Partnership Agreement (CEPA). Bangladesh invited Indian investment in the jute mills of Bangladesh to revitalize and modernize the jute sector. India requested early finalization of modalities for implementation of the Katihar – Parbotipur – Bornagar cross border electricity interconnection. Took stock of progress in the.implementation of the India Bangladesh Friendship Pipeline and unit-1 of the Maitree Super Thermal Power Project.

Connectivity for Prosperity: India expressed gratitude for Bangladesh’s initiative of revitalizing the pre-1965 rail connectivity. Bangladesh reiterated its eagerness to partner in the ongoing initiative of the India – Myanmar - Thailand trilateral highway project. Also agreed to an early operationalization of the BBIN Motor Vehicles Agreement through expeditious signing of the Enabling MoU for Bangladesh, India, and Nepal to commence the movement of goods and passengers, with provision for Bhutan to join at a later date. India urged for early operationalization of the trans-shipment Agreement on the use of Chattogram and Mongla Ports for the Movement of Goods to and from India (Kolkata to Agartala via Chattogram). India also requested for trans-shipment arrangement in Munshiganj and Pangaon as part of the Protocol on Inland Water Transit and Trade.

Recently, Maitree Setu (between India and Bangladesh) over River Feni in South Tripura has been inaugurated. Bangladesh offered the use of Chattogram and Sylhet International Airport, by the people of North East India, especially of Tripura.

Cooperation in Public Health: Bangladesh thanked the Government of India for giving 3.2 million doses of Oxford Astra Zeneca, Covishield vaccine made in India. 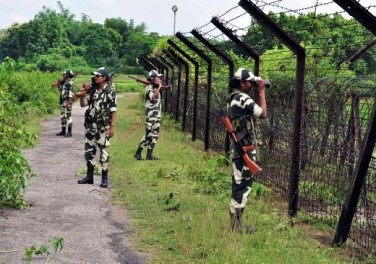 Bangladesh reiterated the request for 1.3 km Innocent Passage through river route along with River Padma, on humanitarian grounds. India requested for completion of border fencing at all pending sectors at the international border at the earliest, beginning from the Tripura (India) - Bangladesh sector.

Defence Cooperation: Emphasized on the frequent exchange of programs and enhancing cooperation in training and capacity building. India has offered a USD 500 million line of credit for defence imports from India into Bangladesh and thus requested for early operationalization of this defense Line of Credit. Welcomed the signing of an MoU on Disaster Management, Resilience and Mitigation.

Acknowledged the potential of new and emerging areas of cooperation in cutting edge areas of science, artificial intelligence, peaceful uses of nuclear technology, big data and technology enabled services in health and education. 50 young entrepreneurs from Bangladesh were invited to visit India and present their ideas to venture capitalists.

Partners in the Region and the World: Agreed to continue working together for common objectives in the United Nations and other multilateral fora. Emphasized that the regional organizations, such as SAARC and BIMSTEC have an important role to play, particularly in the post-Covid-19 situation. Bangladesh thanked India for convening the SAARC leaders Video Conference in March 2020 and for proposing creation of the SAARC Emergency Response Fund to counter effects of the global pandemic in the South Asian region. Bangladesh highlighted that the country would assume chairmanship of the Indian Ocean Rim Association (IORA) for the first time in October 2021 and requested the support of India for working towards greater maritime safety and security in the Indian Ocean region. India welcomed the decision of Bangladesh to join the New Development Bank (NDB).

PROGRAMS UNVEILED BY BOTH THE PMs

Foundation stone laying ceremony for a memorial in the honour of the Martyrs of the Indian Armed Forces who sacrificed their lives during Liberation War of 1971 at Ashuganj, Brahmanbaria. Foundation stone for five packages out of total eight packages of Rooppur Power Evacuation Project. Inauguration of 3 border haats, Nalikata (India) - Saydabad (Bangladesh), Ryngku (India) - Bagan Bari (Bangladesh) and Bholagunj (India) – Bholagunj (Bangladesh). Border Haats aim at promoting the wellbeing of the people dwelling in remote areas across the borders of two countries, by establishing a traditional system of marketing the local produce through local markets. Inauguration of ‘Mitali Express’ - passenger train connecting Dhaka on Bangladesh side and New Jalpaiguri on the Indian.

Q.1 Recently which of the following two were awarded with the Gandhi Peace Prize for the year 2019 & 2020?

Q.2 Recently which of the following dates is going to be recognised as 'Maitri Diwas' by India & Bangladesh as India recognized Bangladesh in the year 1971?

Q.3 On the PM's visit to Bangladesh, Bangladesh reiterated its long-pending request for concluding the interim agreement on the sharing of the waters of which of the following rivers?

Q.4 Which of the following countries would assume chairmanship of the Indian Ocean Rim Association (IORA) for the first time in October 2021?

Q.5 Which of the following is observed in Bangladesh to commemorate the victory of the Armed forces in the 1971 Indo-Pakistani War?