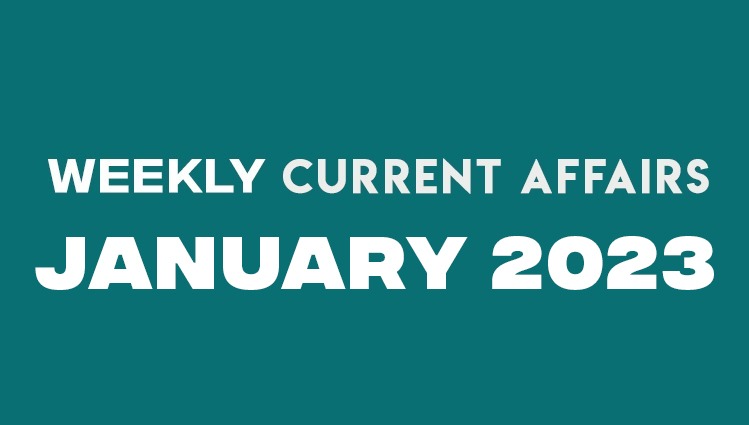 It gives us great pleasure to release the monthly edition of the PRAVAHINI – Monthly e- Compendium & Weekly e-Periodicals of Current Affairs. The magazine’s members have shown considerable cooperation as well as devotion. We at success mantra.in working tirelessly to create this magazine and bring it to you with a great sense of gratitude.

The January -2023 eBook covers the current events that happened in the month of October. Current Affairs is a crucial component of any competitive exams including CLAT, AILET, DU-LLB, HM, CAT, IAS, PCS, SSC, CUET, Banking, MBA, and other competitive examinations.

Current Affairs play the more significant role in many competitive and government exams. It holds the power of making or breaking your chance of success. Therefore, the candidates should cover the Current Affairs thoroughly and smartly.

The Central Government of India recently announced the launch of a new integrated food security scheme, which will provide free food grains to 81.35 crore beneficiaries under the National Food Security Act (NFSA) for the year 2023.

The National Green Hydrogen Mission is expected to have wide-ranging benefits, including:

By 2030, the National Green Hydrogen Mission is expected to achieve the following outcomes:

The Department for Promotion of Industry and Internal Trade (DPIIT) in India is currently working on a new industrial policy that aims to increase financing options for industry and promote the “Made in India” brand.

Defense minister Rajnath Singh has inaugurated the Siyom bridge in Arunachal Pradesh, along with 27 other infrastructure projects completed by the Border Roads Organisation (BRO).

For the first time in nearly 45 years, Assam recorded zero poaching of endangered rhinos in 2022. These animals, known for their valuable horns, were poached 191 times in Assam between 2000 and 2021.

Despite opposition from Goa, Karnataka Water Resources minister Govind Karjol announced that the state will proceed with the Kalasa-Banduri project on the River Mahadayi.

What is the Kalasa-Banduri Nala Project?

WHAT IS ASPIRATIONAL BLOCKS PROGRAMME (ABP)?

Recently, the Aspirational Blocks Programme (ABP) was launched during the 2nd National Conference of Chief Secretaries held from 5th January to 7th January, 2022.

What is the Aspirational Blocks Programme?

What is the Aspirational District Programme?

WHAT IS TITLE 42 & WHY IT WAS IMPLEMENTED?

The United States recently announced that it will extend COVID-19 pandemic-era restrictions, known as Title 42, to expel migrants from Nicaragua, Cuba and Haiti caught crossing the U.S.-Mexico border back to Mexico.

Croatia has taken two major steps towards further integration with the European Union (EU) by adopting the euro and joining the Schengen zone.

China’s CRRC Corporation Ltd. launched a hydrogen urban train, and it is the first in Asia and the second such train in the world. Germany introduced green trains a few months back. The hydrogen trains have a speed of 160 km per hour and the operational range without refueling is 600 km.

The governments of India and the UK marked Pravasi Bharatiya Divas on January 9, 2023 by launching the Young Professionals Scheme, which allows up to 3,000 degree-holding citizens aged between 18 and 30 to live and work in each other’s countries for a period of two years.

WHAT IS FREEDOM CAUCUS GROUP?

On January 4 and Thursday January 5, Republicans in the House of Representatives failed to elect a leader, with a faction of holdouts, largely from the ultra-conservative, hard-right Freedom Caucus, refusing to vote for nominee Kevin McCarthy (R-CA).

The Reserve Bank of India (RBI) has launched Utkarsh 2.0, the second phase of its medium-term strategy for strengthening regulatory and supervisory mechanisms.

WHAT IS PURCHASING MANAGER'S INDEX (PMI)?

As per the S&P Global India Manufacturing Purchasing Managers’ Index (PMI), the manufacturing sector in India had its most significant production growth in 13 months in December 2022.

What is the Purchasing Managers Index?

Kerala has become the first state in India to enable digital banking in all eligible accounts. According to the State-Level Bankers’ Committee (SLBC), the state now has at least one product enabled digitally in 3.76 crore accounts.

The Reserve Bank of India (RBI) has announced its plans to issue Sovereign Green Bonds worth Rs 8,000 crore in two tranches on January 25 and February 9. The proceeds of the bonds will be used to fund public sector projects aimed at reducing the carbon intensity of India’s economy.

Odisha won the UN-Habitat’s World Habitat Awards 2023 for Jaga Mission, a 5T initiative of the state.

About the Jaga Mission

The Assam government has recently announced the recipients of three prestigious awards: “Asom Baibhav,” “Asom Sourav,” and “Asom Gourav” for the year 2022-2023. These awards recognize and honor individuals who have made significant contributions to the state and its people.

What are the Key Points of the Hockey World Cup?

The Department for Promotion of Industry and Internal Trade (DPIIT) will be organizing the Startup India Innovation Week from January 10th to January 16th, 2023. This event is part of the Azadi Ka Amrit Mahotsav celebrations and will take place in over 75 locations across the country.

Every year, World Braille Day is celebrated on January 4 by the United Nations and several other international organizations. The day is celebrated to create awareness of the importance of Braille as a means of communication in the realization of human rights for the blind.

According to a report released by the United Nations’ Food and Agriculture Organization (FAO) on January 6, world food prices reached a record high in 2022; despite experiencing a ninth consecutive monthly fall in December.

Tesla and Twitter CEO Elon Musk became the first person to lose $200 billion from his net worth. Elon Musk has seen a drop of up to $137 billion in his wealth after a recent drop in Tesla Shares.

WHAT IS K9 VAJRA?

The Defence Ministry has started the process for the procurement of 100 more K9-Vajra tracked self-propelled howitzers. The 100th gun was delivered to the Army in 2021.

The Ministry of Science and Technology has notified a National Geospatial Policy (NGP) 2022, with the goal of making India a world leader in the Global Geospatial Sector.

India’s first underwater metro service, the Kolkata Metro Rail Corporation (KMRC) said that the East-West Metro Corridor project is expected to be completed by December 2023. With this, another feather is being added to the crown of Kolkata Metro, the first metro railway in the country.

The Government of India has sponsored the proposal for the International Year of Millets (IYM) 2023, which has been accepted by the United Nations General Assembly (UNGA).

WHAT IS HONEY MISSION & SWEET REVOLUTION?

Under the Honey Mission, 1 lakh and 75 thousand bee boxes have been distributed so far by the Khadi and Village Industries Commission (KVIC) after providing beekeeping training to 17 thousand 500 beneficiaries across the country.

What is a Honey Mission?

What is Sweet Revolution?

WHAT IS FLY ASH?

Recently, the Union Ministry of Environment, Forests and Climate Change (MoEF&CC) clarified the compliance dates for the complete utilization of fly ash for Thermal Power Plants (TPP) in a new notification.

What is Fly Ash?

Former Chief Justice of India and member of the Rajya Sabha Ranjan Gogoi has released a book titled ‘Chief Minister’s Diary No.1’ containing the account of events of the first year in office of Assam chief minister Himanta Biswa Sarma. The book featured accounts of daily activities he undertook as a chief minister.

According to a new U.N. report, earth’s protective ozone layer is slowly but noticeably healing at a pace that would fully mend the hole over Antarctica in about 43 years.

What are the Findings of the Report?